The Church was never meant to be a static organization but a living organism; and it is the great commission that bares this life upon the Church. 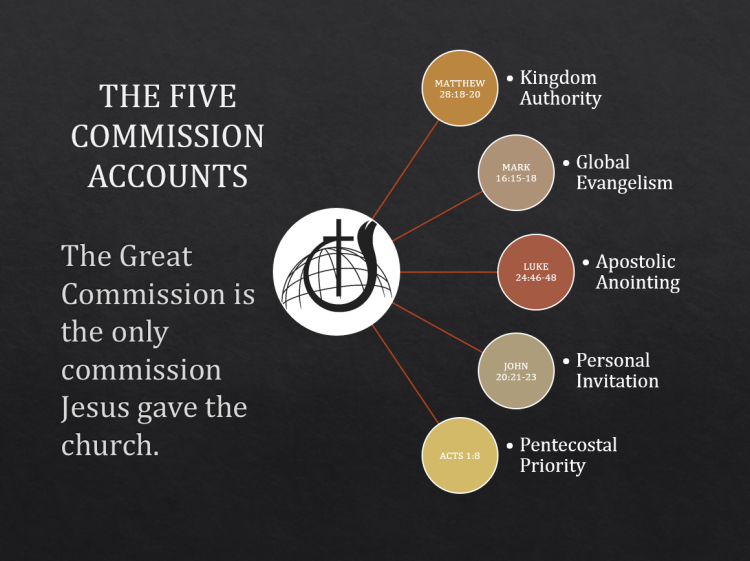 Jesus: I am here speaking with all the authority of God, who has commanded Me to give you this commission: Go out and make disciples in all the nations. Ceremonially wash them through baptism in the name of the triune God: Father, Son, and Holy Spirit. Then disciple them. Form them in the practices and postures that I have taught you, and show them how to follow the commands I have laid down for you. And I will be with you, day after day, to the end of the age. (From THE VOICE)

The official power and right to order by faith, lead in the Spirit, and command justice; delegated from Christ Jesus and secured by the Word; sanctioned by God and the cloud of witnesses.

But you are a chosen people, set aside to be a royal order of priests, a holy nation, God’s own; so that you may proclaim the wondrous acts of the One who called you out of inky darkness into shimmering light. (1 Peter 2:9  the Voice)

Thank You, Father, as You have made us eligible to receive our portion of the inheritance given to all those set apart by the light. You have rescued us from dark powers and brought us safely into the kingdom of Your Son, whom You love and in whom we are redeemed and forgiven of our sins through His blood. (Col 1:12-14  The Voice; also 15-20)

He humbled Himself, obedient to death—a merciless death on the cross! So God raised Him up to the highest place and gave Him the name above all. So when His name is called, every knee will bow, in heaven, on earth, and below. And every tongue will confess “Jesus, the Anointed One, is Lord,” to the glory of God our Father!  (Phil 2:8-11)

1.To bring new people into the kingdom

2.To raise up those in the Kingdom

“So since we stand surrounded by all those who have gone before, an enormous cloud of witnesses, let us drop every extra weight, every sin that clings to us and slackens our pace, and let us run with endurance the long race set before us.” (Hebrews 12:1  The Voice)

“I say, take a closer look and you will see that the fields are ripe and ready for the harvest.”  (John 4:35b)